Four Lessons That Taekwondo Has Taught Me 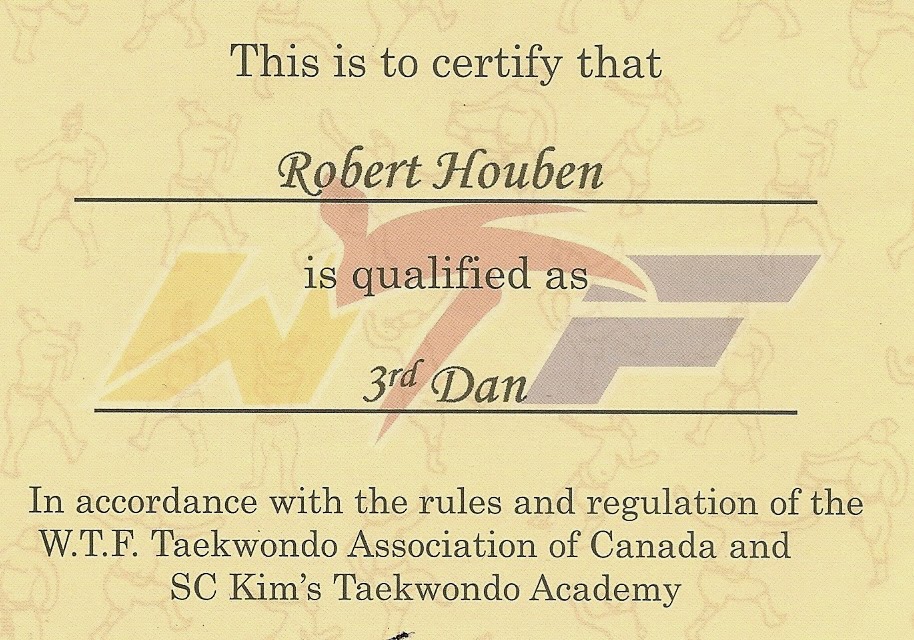 It's my belief that everyone should do something outside of their comfort zone from time to time. There's no great thrill in doing something that you always knew you could do. You really experience life when you take on something where you are not certain of your ability to succeed.

When my son was 13, my business travel had fallen off and because I had the time to do something organized with him, I signed the two of us up for Taekwondo classes.

For the first while, we attended a class right after the senior black belts.  I'd watch what they did and had great doubts that I'd ever be able to do that. (I was mid-40s, initially in moderately poor shape, and not very flexible.)  For the time, I decided to focus on what I could do, which was the first upcoming test - I was doing this to be with my son, so the long term picture was secondary.

This began a journey of struggling to be ready for the next test.  It was generally challenging but that next test looked mostly achievable.

Fast forward 4 years, and I was looking at the black belt, and I knew I could do it! It would be tough, but it would be achievable!

Since then my son moved on, but I've stayed in Taekwondo.  This last year (2014) just one week before Christmas, I tested and passed my 3rd Dan Black Belt.

The experience has reinforced four things for me that I believe have helped me in all areas of my life:

It Pays to Look Ahead:

Matthew and I at each test would watch what the people at the next belt level had to do.  We'd also watch them while we were practicing alongside them leading up to the test.  That way we knew what we would need for that next test.

We also attended a black belt test when we were still about 5 tests away from getting our own black belts.  There were things that were part of the black belt test that were not standard for a regular colour-belt test.  This was an eye opener for us, and valuable information.  Whenever you plan to do something new and different, it pays to ask lots of questions and do some research. Then plan what you will do to prepare.

There is something powerful about teamwork.  When people really work together, 1+1 is greater than 2.  2+2 becomes greater still.  There's a dynamic that makes a group more powerful than just an individual, and up to a certain size, which seems to be dependent on the activity to some extent, the more team members you have that are really focused on getting results the more powerful the effect.

This requires the team members to have a common goal and works best in sports like martial arts, where (apart from sparring) team members are not competing with each other, but are all working to help each other.  That's a lot like many teams I've worked with in business situations, where we are all working to a common goal and seeking to help each other achieve our various objectives so that we can all win.

Taekwondo fosters the principles that support this type of teamwork.  The master and instructors of the school I attend, S. C. Kim's Taekwondo in Burnaby, BC, Canada are strong advocates of these attitudes and life-skills.  In the best companies that I've worked for, those same principles have existed to differing degrees and have been critical to the success of those projects!

Strike "Can't" From Your Vocabulary:

The word "Can't" has no place in Taekwondo, unless you have an injury, and even then, you will be given alternate things you can do.  In Taekwondo, you are not competing against the next student, but really you are competing against yourself. The battle's in your head and heart far more than in your body.

Even when I am sparring, it's less important to me that I get more points than my "opponent" but rather that I learn and improve myself.  I expect my opponent to do the same.

I guess if I was sparring in a competition with someone from another school that would change a bit, but in our school we all work to better both ourselves and each other.

When you are competing against yourself, the limitation is not what another person is doing, it's usually believing that I can do better than the last time.  It's getting that level of focus that will take me to the next level.  Sometimes it's about taking that focus home so I do the workouts and stretches I need to do in order to succeed.  When my limitations come in (injuries, lack of flexibility, etc...), it's often about finding a way to improve my technique so that the quality of what I deliver still improves despite the physical limitations

I'm now mid-50s and my body has some definite limitations - but my technique still has room to improve, so I'm still improving!  I've had lots of opportunity to say I "can't", but I always strive to change that to a question: "What other options do I have to improve?"

In short, there's always room for improvement for all of us!

The final lesson that I'd like to share with you is to never stop growing.  There's always more to achieve. A black belt is not an end-point as much as it is a door to another chapter of your growth!

When I got my first Dan black belt, I felt a bit lost at first. There's a big time gap between first and second Dan, so it felt like there was nothing short-term to strive for. This was an important opportunity for me to realize that I could set myself personal interim goals. I didn't need to have someone else tell me what the next test was - I could make that test whatever I felt would challenge and improve me!

While there are other principles that are reinforced by Taekwondo, these four lessons are the ones that stand out for me, and that seem to resonate throughout both my work, my volunteering and my personal life!

I hope that this little post has given you some encouragement to step out and try something different to better yourself!
Posted by Robert Houben at 10:13 PM No comments: